Goldacre shows us how to be moral in the information age

A review of ‘Bad Pharma: How drug companies mislead doctors and harm patients’ by Ben Goldacre

Dr Ben Goldacre used to write a popular quack-busting column called Bad Science for the British newspaper The Guardian. He became quite well-known for that column and his book by the same name. 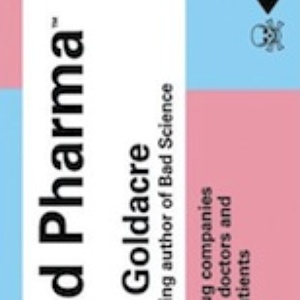 Along with Nathan Geffen’s Debunking Delusions, Bad Science has become my standard book recommendation for new interns at the Treatment Action Campaign, young health journalists, and just about anyone with an interest in how quackery and pseudo-science actually works.

In his new book Bad Pharma: How drug companies mislead doctors and harm patients Goldacre turns his attention to what is probably a more serious problem, the large scale distortion of our knowledge of medicines. Do not be fooled by the title though. Even though the accumulation of evidence presented here reflects very poorly on the pharmaceutical industry, the focus is as much on the insufficient regulatory framework that allows the industry to get away with the things it does. If you are looking for overly-simplistic pharma-bashing, this is not the book for you.

Of course, the book does cover the already well-documented ways in which drug companies over-market their drugs. However, the most interesting chapters of the book are not those dealing with the depressing details of pharma-sponsored speaking tours or the cynical ways in which drug reps cultivate relationships with and then manipulate doctors, it is the way in which important evidence is hidden away from scrutiny.

One of the examples cited in the book is the way in which GlaxoSmithKlein neglected to publish studies showing that their antidepressant paroxetine does not work in children. This was despite the fact that they knew paroxetine was being prescribed to thousands of children. Not only were these thousands of children prescribed a drug that did not work, they were also exposed to the side effects of paroxetine. It would also emerge over time that paroxetine increased the risk of suicide in some depressed children.

But paroxetine is only the tip of the iceberg. Rather disturbingly, it is not at all uncommon for studies with negative findings to be buried in this way. Industry-funded studies are much more likely to report positive results than publically funded studies. The rot runs deep, from the decision on whether or not to publish, right down to essentially rigging studies by comparing drugs to high doses of competing drugs or by changing the criteria by which you measure your treatment once you have access to all the results.

On the other side of the coin, the regulators who are supposed to police this kind of thing have often shown what is either remarkable naivety, or a blatent disregard for the public interest. So for example, the European Medicines Agency (EMA) for years refused to release details of studies done on the weight loss drug rimonabant.

The EMA, who seems to have a cosy relationship with industry, made the ridiculous argument that the research data on rimonabant was confidential commercial information. It was never explained what about the study findings required such secrecy. It eventually emerged that people taking rimonabant are at an increased risk of serious psychiatric side effects and the drug was withdrawn. In short, the EMA’s refusal to share information meant that this increased risk remained hidden for no good reason whatsoever.

Many readers will have read about many of these cases before, but Goldacre brings them all together in one place and maps out the relationships between them. Indeed, an extract from the book has been a hit online. The book has already been positively reviewed in the Economist and The New Statesman.

But reading summaries or book reviews, like this one, about Bad Pharma is not enough. Precisely because the machinery of medical evidence is so extensive and its imperfections are so widely distributed within this system, no summery or extract can get you close to the whole, rather awe-inspiring picture.

In an interview on the Nature magazine podcast, Goldacre was asked about the complexity of the subject matter. His reply was that the issues are not complex, but rather that they are big. I agree. And the best way to get your head around a big topic like this is to have it all mapped out in a book – which is what Goldacre has done.

Whereas some science writers may have a few relatively simple ideas that they tease out into best-sellers, Bad Pharma is remarkably stripped down for a book of over 300 pages. There are none of the digressions or indulgences that are often used to pad out popular science writing. There is also no need here to overplay or cherry-pick evidence to fit a narrative because the subject matter speaks for itself.

It would have been easy for Goldacre to make more of the intrusion of economic interests into healthcare and to describe what is happening against a broader social-political context. But he wisely chooses to steer clear of politics and instead to deliver an argument that is focused, evidence-based, and to the point.

Goldacre himself applies the same rigorous standards of evidence that he would like to see others apply. Wherever possible he cites systematic reviews of the questions he is discussing. Where evidence is lacking, he is open about that. In this, and in his attempt to avoid cherry-picking the subtext of this book, even more than his previous one, is that being serious about evidence is not only a matter of nit-picking geekiness, but essential to what it means to be moral in the information age.

As we know very well in South Africa, a poor understanding of how scientific evidence works can cost hundreds of thousands of lives. AIDS denialism was an obvious and clear case of policy not supported by evidence. What Goldacre exposes in Bad Pharma is something almost as monstrous. It is less obviously immediate and the players are less obviously misguided, but after reading Bad Pharma I am convinced that drug companies failing to publish negative findings, or regulators refusing to release detailed information about side effects can be and often are as harmful as AIDS denialists or anti-vaccination quacks. And in case you think this sounds implausible, the book provides a number of disturbing examples of real harm done and lives damaged and lost.

Much of the lethargy about getting researchers, regulators and industry to clean up their acts seems to be exactly because the harm done by suppressing data or cherry-picking study outcomes is not as obvious as say quack-based health policy. After all, poor an excuse as it is, we intuitively understand that people would be more excited about publishing positive findings than negative ones. Goldacre is correct to compare this conspiracy of mediocrity to the UK’s phone hacking scandal and MPs expenses scandal. As in those cases, the fact that the practice is widespread will only shroud its moral indefensibility for so long.

Incidentally, the book is released at a time when South Africa’s Medicines Control Council (MCC) is being replaced by the new SA Health Products Regulatory Authority (SAHPRA). This change over offers useful opportunities to make our medicines regulator more transparent and efficient than the slow and opaque beast that the MCC has become over the last 14 years. One hopes that those involved in the switch-over will read this book and think seriously about the issues raised on openness and accountability.

Which is not to say that Bad Pharma is an essential read for only regulators, doctors and researchers. It is a clearly written and accessible diagnosis of a problem that impacts all of us, since the distortion of medical evidence misleads all doctors and thereby harms all patients. This is clearly everyone’s business. When scientific medicine is abused and distorted like it currently is, it undermines public confidence in medicine. As a first step toward getting more people to recognize the extent of the problem, Bad Pharma is a uniquely important book.