Even after various health authorities warned about the health risks associated with drinking Miracle Mineral Supplement, it is still being marketed as a cure for HIV and cancer. 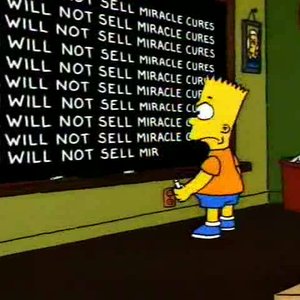 We've probably breached copyright laws with this one, but we couldn't resist. Source: Bart's Blackboard

In April 2010 representatives of a Dr Zondo from Durban requested a meeting with the Treatment Action Campaign’s (TAC) uMgungundlovu office. The purpose of their visit was to introduce TAC to the wonders of Miracle Mineral Solution (MMS, AKA Miracle Mineral Supplement). They claimed that MMS cures 31 different diseases, including HIV.

TAC members were sceptical and started digging around. They found that MMS is not sold only by Dr Zondo’s distributors but also by others. The other thing that soon became clear, was that MMS was not just another quack product, but that it posed a direct health risk.

When using MMS as prescribed people are essentially drinking chlorine dioxide – commonly used as an industrial bleech or disinfectant. People are sold the MMS liquid (Sodium Chlorite and distilled water) that they then have to mix with citric acid or lemon or lime juice. The product of the resulting chemical reaction is chlorine dioxide.

According to the website of MMS Africa, ingesting this product “produces a major boost to the immune system, killing virtually every known pathogen, including bacteria, viruses, fungi, molds, and yeasts.” Various claims relating to using MMS for the treatment of HIV/AIDS, cancer, diabetes, dental care, and even animal care are also made. The site even includes disturbing advice on force-feeding your unwilling pet MMS.

Not surprisingly, neither the MMS Africa website, nor the website of Jim Humble, the "inventor" of MMS, provide any scientific references that back up their claims. Searching on the Pubmed database and Google Scholar i couldn’t find any evidence of efficacy in humans either.

Whereas many quack products will not do the body any harm, MMS is actually dangerous. In may 2010 Health Canada released an advisory warning Canadians about the health risks associated with MMS. They said that oral consumption of the product may cause health problems such as “abdominal pain, nausea, vomiting, and diarrhoea or more serious problems such as, poisoning, kidney failure and harm to red blood cells that reduces the ability of the blood to carry oxygen, among others.”

Then In July 2010 the United States Food and Drug Administration (FDA) followed suit and issued a warning in which they noted many of the same health risks. They recommended that consumers who have MMS should stop using it immediately and throw it away. In September 2010 the British Food Standards Agency also released a warning against the use of MMS.

It seems that Jim Humble himself brought MMS to Kwazulu-Natal. On his blog, Humble recounts a visit to South Africa during which he introduced a Dr Zondo to MMS – presumably the same Dr Zondo whose representatives met with TAC. Humble claims that Zondo got “an order for 2,000 bottles of MMS from the President for the S. African Armed services.” (We have no evidence to support this claim.)

Humble recounts teaching a Maliga Naidoo how to make MMS and includes her number on his blog. We called Naidoo and she said that she was a distributor and not a manufacturer of MMS.i Naidoo said that the manufacturer is someone named Mangasutho and that she cannot give us his number, but will forward our details to her if we SMS them to her. She also said that Jim Humble had stayed with them for a month and showed them how to use MMS. Naidoo is also mentioned in an article on MMS that appeared in the Witness newspaper.

Humble’s blog continues to recount treating HIV patients with MMS in an undisclosed remote area. However, this part of his story as well as the rest of his account of spreading this dangerous product in Southern Africa cannot be corroborated.

Maybe not surprisingly, MMS is endorsed by the well-known Tshabalala-Msimang era AIDS denialist Tine van der Maas. On her website she claims that it is being sold by Dis-Chem for R285 a bottle. However, when we phoned a number of Dis-Chem stores in Kwazulu-Natal they all said they did not stock MMS.

Where MMS certainly is available, is the MMS Africa website. Here you’ll pay R150 for 100 millilitres.

What to do about MMS

I recently lodged a complaint with the Advertising Standards Authority about the claims made on the MMS Africa website. However, useful as an ASASA ruling against MMS Africa will be, it will do little to prevent the on-the-ground marketing taking place in Kwazulu-Natal. In August 2010 the Witness newspaper quoted Medicines Control Council registrar Mandisa Hela saying that inspectors had been instructed to investigate the sale of MMS. Theoretically, the correct avenue through which to address a dangerous product like this is the law enforcement unit (LEU) in the Department of Health – I assume it is inspectors in this unit that Hela was referring to.

I wrote to the LEU in December 2010, highlighting roughly the same information included in this article. The latest i’ve heard from them is that the matter is still being investigated. However, the LEU is under-resourced and overburdened and a speedy outcome is therefore unlikely.

Please alert us in the comments if you are aware of anyone selling this dangerous product.