Novartis is trying to extend its patent on a cancer drug in India. It is this kind of behaviour that gives pharmaceutical companies a bad name and emboldens anti-pharma quackery. 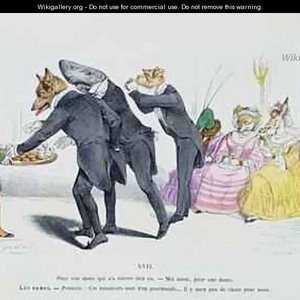 "These gentleman are so greedy." Cartoon by Grandville, 1800s. Source

Quack adverts often use the distrust of the pharmaceutical industry to market untested remedies.

When pharmaceutical companies research new drugs, they are mainly guided by profit incentives, not the impact or scale of a disease. When a company develops a new medicine it can apply for a patent in most countries or regions. This generally gives the company at least twenty years exclusive use of the medicine. The company effectively has a monopoly, meaning they can charge extremely high prices, often for medicines. Often, only the well-off can afford essential medicines, and even then with great financial difficulty.

Even more troubling is the bullying by some pharmaceutical companies to get developing countries to adopt laws that delay the entry of competitive generic medicines that drive prices down. The ongoing legal challenges of Novartis against India risks further reducing confidence in the pharmaceutical industry and fueling anti-pharma conspiracy theories.

The controversy around section 3(d) of India’s Patent Act

The ongoing legal battle that India is facing against Novartis centers around section 3(d) of India’s Patent Act. In this controversial section of the Act, India excludes new uses and new formulations of already existing medicines from patentability. Indian lawyers believe this exclusion is justified under the international agreement governing the protection of intellectual property, known as TRIPS (Trade Related Aspects of Intellectual Property agreement).

...patents shall be for any inventions, whether products or processes, in all fields of technology, provided that they are new, involve an inventive step and are capable of industrial application ...

It also contains a footnote which states:

For the purposes of this Article, the terms "inventive step" and "capable of industrial application" may be deemed by a Member [e.g. India] to be synonymous with the terms "non-obvious" and "useful" respectively.

By excluding new uses and formulations from patentability, India is preventing pharmaceutical companies from extending patents simply by finding a new use for an already existing medicine or by making an incremental change to an existing medicine that does not enhance its efficacy or provide an additional therapeutic benefit.

Pharmaceutical companies frequently extend their patents with new use and formulation applications. A recent review of patents in Thailand, a country that does allow new use and new formulation patents, reveals the extent of this. According to Thailand’s Health Systems Research Institute 1,960 of the 2,034 patents granted in the past decade were for new uses or formulations, categorized as 'evergreening' patents.

Many developing countries would benefit from less stringent patent laws. But in determining standards of patentability, countries face significant pressure from the US, EU and the pharmaceutical industry. The US and EU consistently push for new use and formulation patent protection in trade agreements and Novartis has brought repeated legal challenges in India.

Novartis applied for a patent in India on the cancer medicine imatinib, which the company brands as Gleevec or Glivec. In 2006, India’s Patent Controller rejected Novartis’s application because the application was for a new formulation of an existing substance.

The drug was granted a patent in the United States in 1993. As imatinib was already in the public domain prior to India bringing its patent law in line with TRIPS (which was only signed in 1995), India is not required to grant patent protection on the medicine.

Following the rejection, Novartis brought a challenge to the Madras High Court claiming that section 3(d) of India’s Patents Act is unconstitutional and in violation of the TRIPS agreement. The court also ruled that section 3(d) was not unconstitutional and dismissed the claim that it was in violation of TRIPS, stating that the Court did not have jurisdiction over the TRIPS agreement.

Novartis appealed the rejection of the patent with India’s Intellectual Property Appellate Board who, in 2009, again rejected the application finding that the new formulation of imatinib did not provide enhanced therapeutic efficacy over the already existing molecule. Novartis went on to challenge this decision with India’s Supreme Court. The hearing began on 9 August 2011 and is currently underway.

The Lawyers Collective, an Indian legal NGO, has further background on the case and provides regular updates.