The problems with homeopathy

The barber’s pole is one symbol of the bloody past of modern medicine. In the late middle-ages barbers not only cut hair but also performed bleeding, cupping and leaching – common ‘medical’ practices. The ill were actually better off not going to a physician. Today the drawing of blood as a treatment is only used in very specific circumstances, e.g. to reduce the amount of red blood cells in cases of haemochromatosis. 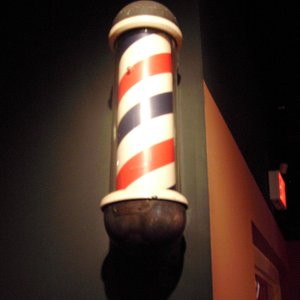 A barber's pole from approximately 1938 in North Carolina. Source: Wikipedia.

Clinical trials shows that homeopathy can be explained by the placebo effect.

So Samuel Hahnemann had considerable success over his blood-letting peers when he first developed his theories of homeopathic medicine a little over 200 years ago. Doing nothing gave him an edge.

Hahnemann proposed that ‘like cures like’ (his ‘law of similars’, or ‘the hair of the dog that bit you’) and that his remedies were ‘potentised’ (made stronger) by repeated dilution and ‘succussion’ (hitting the dilution 10 times against a leather covered board).

The Homeopathic Association of South Africa (HSA) claims on their website “There is no condition that should be excluded from the repertoire of Homoeopathy. Homoeopathy is a complete medical science with which any medical condition in any human being of any age can be treated.”

The ‘law of similars’ is an appeal to magic. Homeopaths cannot explain how it works, and have no evidence that it does indeed work. The ‘proving’ of homeopathic remedies is usually done by small groups of individuals – purely based on anecdote (along the lines of “today I took this treatment and I felt anxious”).

If you drank one litre of a typical homeopathic preparation, the probability that you would ingest even a single molecule of the active ingredient is very close to zero. For example, a plant called Belladonna is used to treat many medical ailments, albeit that there is insufficient evidence to show that it is effective. Homeopaths also prescribe it – in homeopathic quantities. To believe that the belladonna in the original ‘mother tincture’ has any effect at all would break some of the fundamental rules of chemistry. Some homeopaths will have you believe that the water with which the preparation is diluted retains a ‘memory’ of the ingredient – even when the ingredient is itself so dilute as to be non-existent. Homeopaths have no explanation as to how this ‘action at a distance’ is possible. Some will refer to ‘quantum effects’ without understanding anything about quantum mechanics.

The ‘gold standard’ test for proving the efficacy of modern medicines is the randomised double-blind trial. The Cochrane Collaboration has performed several meta-analyses (where multiple trials are evaluated with and against each other) and found nothing that suggests efficacy. A study published in 2005 in The Lancet compared 110 homeopathy trials to matched trials using conventional medicine. It concluded, “... there was weak evidence for a specific effect of homoeopathic remedies, but strong evidence for specific effects of conventional interventions. This finding is compatible with the notion that the clinical effects of homoeopathy are placebo effects.”

As Jack Killen, acting deputy director of the US National centre for Complementary and Alternative Medicine says "There is, to my knowledge, no condition for which homeopathy has been proven to be an effective treatment."

Homeopaths will retort ‘but my patients tell me it works’. Perhaps that is so. But the plural of anecdote is not evidence. Individually the patients are likely experiencing the placebo effect.

Homeopathy is not a ‘complete medical science’. “Like cured by like” is a failed hypothesis when we look at treating infectious diseases like TB, cholera, malaria or AIDS. Science mostly understands the mechanisms of how these are spread, how they infect and affect us, how the symptoms arise, and how to work with our bodies defence mechanisms in order to overcome the disease. Homeopathy does none of this.

Homeopathy is dangerous when it is seen as an alternative for conventional treatments for dangerous diseases and conditions. For example, the daughter of a New Zealand homeopath died of sepsis as a result of an easily treatable eczema condition – because he refused to use conventional medicines.

The University of Johannesburg, and the Durban University of Technology offer masters degrees in homoeopathy. They are both housed in their institution's faculties of medical science. This is a waste of public money and students’ time. This money would be far better spent on training and supporting primary health care practitioners.

The UJ offers a clinic which claims “Homoeopathy is a complete treatment modality and is often used effectively to assist in the treatment of: ... HIV and AIDS related diseases”. This is a claim that should be strenuously denounced.

The ancient Greeks believed health was a factor of the four ‘humours’ (yellow-bile, black-bile, blood and phlegm). Blood-letting has long since been abandoned as a generic treatment. Homeopathy is just another theory that should have no place in modern medicine.

Kevin Charleston is a sceptic, rational humanist and concerned consumer. He is also a cantankerous middle-aged man who writes letters to newspapers and complains to the ASA.

A couple of interesting facts:

Double Blind Tests and the results associated with much of the hard science of medicine is becoming questionable: http://www.newyorker.com/reporting/2010/12/13/101213fa_fact_lehrer

@Saul your use of the Woo-fington post does little for your credibility. Also a barrage of URLs is not an argument - it merely shows you have little to say on the subject yourself. Beware that you are not deemed to be a troll.

The double-blind RCT may not be the most perfect tool in all cases, and there are many instances where it is mis-used. Do yourself a favour and actually read "Bad Science" - Ben Goldacre points all of these out while he takes a hatchet to the pharmaceutical industry.

But really, is the best argument you have is that the RCT is not infallible?

I agree! Too many patients with life threatening and potentially curable diseases (like cancer) waste time with homeopathy and other alternative therapies. This unnecessarily delays proper treatment resulting often in death or disability. We need to hold people accountable for the harm they cause in misleading sick people.

Luc Montagnier is a sad case of a nobel-prize winner going completely off the rails. After getting his prize he seems to have tuned into someone our (now deceased) previous health minister would have approved: claiming nutrition and supplements are all that are needed to clear HIV. His paper (which was seized on by homeopaths as proof that “water has a memory”) was written and published in just 3 days – in a journal he edited. (Effectively no peer-review) Shortly thereafter he patented a device used in his paper. Scientific method be damned.

Orac, at Respectful Insolence, has a good article here: http://scienceblogs.com/insolence/2010/11/luc_montagnier_the_nobel_disease_strikes.php

PZ Myers at Pharyngula also has a good piece – detailing the (very) poor quality of the research and the paper. http://scienceblogs.com/pharyngula/2011/01/it_almost_makes_me_disbelieve.php