What do we know about AIDS deaths in South Africa?

The obscure Italian Journal of Anatomy and Embryology has published an article by AIDS denialist Peter Duesberg packed with errors. It claims that data from Uganda and South Africa shows that there is no evidence of an HIV epidemic. This journal, whose title indicates no expertise in HIV, has a track record of publishing peer-reviewed AIDS denialist nonsense. 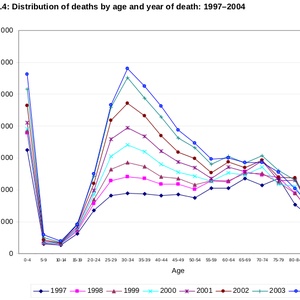 It is very unlikely that any genuine expert in AIDS statistics would have given their paper the go-ahead.

The article will have no influence on medical science. Nor is it likely to influence the South African government; the days of state-supported AIDS denialism are gone. Nevertheless its publication and the subsequent unnecessary publicity it received in the world's leading science journal, Nature, provide a good opportunity to explain how we do know there is a massive HIV epidemic in South Africa.

The two main arguments Duesberg et al. offer are that (1) the population has increased by 20 million in the past three decades and (2) mortality reports released by Statistics South Africa (Stats SA) show relatively few AIDS deaths.

The first argument, that the population has increased, can be swiftly dealt with.

The annual number of births in South Africa over the last two decades has been between 1 and 1.2 million. By the best estimate the number of deaths rose between 1997 and 2006 from about 400,000 to about 650,000 annually. This rise in deaths, as I explain below is entirely consistent with our large HIV epidemic, but it is still far below the number of births: hence South Africa's population has risen. Source: ASSA2008 Provincial Outputs

The second argument is one that has been raised repeatedly by denialists, despite the fact that a little bit of analysis shows it is wrong.

Stats SA regularly publishes a mortality report which tabulates death statistics based on death notification forms. Every time someone dies in South Africa, a death certificate is supposed to be filled in and eventually finds its way into national statistics. A doctor is supposed to indicate the underlying cause of death and Stats SA always publishes the top 10 such causes for natural deaths. It is true that HIV as the underlying cause of death features near the bottom of the top 10 and is quite low. For example in 1997 there were just over 6,600 recorded HIV deaths and this rose to just under 18,000 in 2009.

The reason for this massive underestimate of HIV deaths is explained in an article published in 2005 by Medical Research Council researchers:

In a country such as South Africa, where the HIV status of the deceased is often unknown or the medical certifier does not have access to a full medical history, mis-classification to the immediate cause of death rather than the underlying cause often takes place. Furthermore, since 1992 it has been possible for traditional headmen to complete an abbreviated death notification form, often resulting in misclassification of the cause of death to a generalized ill-defined rubric ... in some rural areas.

In addition, some doctors are reluctant to write HIV as the underlying cause because, even though the cause of death is noted on a confidential form, they remain worried that insurance companies will access the forms and thereby deny funeral and life-insurance payouts to the families of the dead.

But the evidence for a massive increase in deaths due to AIDS is nevertheless abundant from the death data.

All of the above is of course ignored by Duesberg et al. But it is well known to experts on the South African epidemic. This raises a perplexing question: who were the peer reviewers of the Duesberg et al. article? It is very unlikely that any genuine expert in AIDS statistics would have given their paper the go-ahead.