South Africa recently marked 15-years of the adoption of its progressive abortions laws. Yet one can still walk down a busy city street and see adverts for backstreet abortions transforming the street-lights into grammatically-liberal classified ads. Tearing down these adverts gives some sense of satisfaction, but for every advert removed, several more take its place. 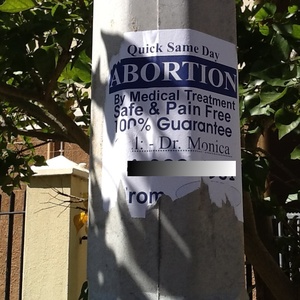 There has been a large reduction in the number of women presenting with incomplete abortions since the 1996 TOP Act.

On one of my first few days of learning Gynaecology and while driving into a hospital, I was handed an advert through my car-window which offered easy access to abortions at any stage of pregnancy. Access to these unsafe practices has also improved with access to technology. Within a few minutes of internet researching, I had had an email conversation with a "Doctor Kevin" who would deliver pills to my door for an abortion of a six-month pregnancy. "Doctor Kevin" became resistant when asked about the abortion’s process and the pills that would be administered.

Counseling is a legal requirement for termination of pregnancy.1 This re-emphasises the dangerous and illegal work being done by people like "Doctor Kevin". Our Choice of Termination of Pregnancy (TOP) Act of 1996 allows a mother free and safe abortion at a registered health facility until 12 weeks of pregnancy, without having to give a reason for her choice. Between 12 and 20 weeks, a mother will be granted the same opportunity if the pregnancy endangers herself, her baby, is a result of rape or incest or if it will place a burden onto her socio-economic status. After 20 weeks (the category which I would have fallen into with"Doctor Kevin"), an abortion will only be performed if two doctors agree that the continued pregnancy would severely endanger the mother or baby’s life or would result in a baby with severe malformation.1

A small study of 46 women done in Pretoria in 2000 studied why they opted to have illegal abortions. More than half gave reasons that showed they were unfamiliar with the law. About 15% did not know where to go for a legal abortion. Only 7% of the illegal abortions were due to unavoidable reasons – being too late in their pregnancy for a legal abortion. Other reasons included anticipating staff rudeness (17%) and anxiety around confidentiality (7%).3 Another study, done in 1999, found that the major problem was a lack of knowledge of the act and the whereabouts of registered abortion facilities.4

If we are to stop illegal abortions --and I believe that given the dangers they pose, they should be stopped-- then public education is key. In the UK, a prominent step was taken that combated unsafe abortion techniques, by using television advertising of the facilities and options available to women.5 Surely we need to do the same thing in South Africa? Such a television campaign would be challenging. Anti-abortion campaigners would no doubt oppose it but we or the state need to educate women about their rights, where they can access safe abortions and the dangers of backstreet abortions. This might also help towards the Millenium Development Goal of lowering maternal mortality.