Patent law reform will benefit both people with cancer and HIV

The Treatment Action Campaign (TAC) and Medicins Sans Frontieres (MSF) campaign to Fix the Patent Laws has been criticised by cancer groups in South Africa. 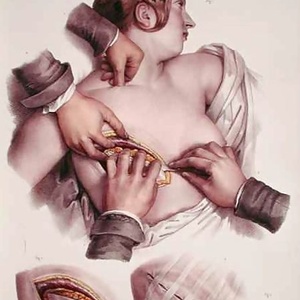 Operating on cancerous tumour by Nicolas Henri Jacob. Source Wikigallery
When TAC and MSF marched to parliament to support India in its legal battle against Novartis the Cancer Alliance released a statement criticising the action.[1] The Cancer Alliance is a recently formed group representing several cancer organisations.

The march for which TAC and MSF were criticised was in support of India’s use of flexibilities allowed under the Agreement on Trade Related Aspects of Intellectual Property Rights (TRIPS).[2] TAC and MSF are currently running the Fix the Patent Laws campaign to call on the South African government to adopt similar flexibilities into our national laws to improve access to medicines.[3]

The amendments we are calling for are in line with current international law. In the TAC and MSF campaign, we are not trying to dismantle the patent system. We are arguing that South Africa should make use of available legal mechanisms that will help restore some balance between the rights of patients and the needs of pharmaceutical companies.

The criticism by the Cancer Alliance is baffling. Particularly, as the objective of TAC and MSF’s campaign is to bring down the prices of numerous cancer medicines. Many critical cancer medicines are not provided in the public sector, or included under prescribed minimum benefits, because of their high cost.

According to Mediscor’s annual Medicine Review, cystostatics (cancer medicines) are the second highest cost to South African medical schemes.[4] Additionally, in a recent Mail&Guardian article, Discovery stated that the cost of oncology treatment in South Africa has grown 11% every year since 2008 and that the increase was mainly because of speciality drugs.[5]

Currently, there are a number of barriers to accessing cheaper generic versions of cancer medicines in South Africa. These barriers include the slow registration of medicines by the Medicines Control Council (MCC), the difficulty in developing and registering generic versions of biological medicines, and South Africa’s strict patent protection and failure to use flexibilities allowed under TRIPS to protect health.

TAC and partners faced the same challenges of patent barriers and slow registration by the MCC in accessing cheaper, generic antiretroviral medicines. The critical antiretroviral medicine tenofovir was registered by the US Food and Drug Administration in 2001, whereas registration in South Africa was delayed by the Medicines Control Council until 2007. But, despite challenges, today affordable ARVs are widely available and about 2 million people are accessing these medicines in South Africa. The cost per person of first line ARVs per year has dropped to R689 today, from over R35,000 in 2000.[5a]

The massive drop in the price of ARVs was in large part due to the work of HIV activists globally, including TAC and MSF. Activists fought against patent barriers on these critical medicines to secure low-cost, generic ARVs throughout the developing world. To access these medicines, TAC organised numerous public demonstrations, complained to the Competition Commission, and even went as far as importing generic medicines from Thailand and Brazil in defiance of patents.

We have looked closely at the Indian example. India has adopted into their national legislation many of the flexibilities allowed under the TRIPS agreement to protect medicine access. South Africa has failed to follow suit. As a result a number of medicines in India are far cheaper than in South Africa. The table below demonstrates the difference in price, in India versus South Africa, of a number of cancer medicines. The flexibilities used by India in the examples below include, using the extension period prior to 2005, granting a compulsory license and rejecting patents on new formulations of existing medicines.

N/A means the medicines is not procured in the public sector. More detailed information is available in the table below.

Cancer is not a disease to which TAC is a stranger. TAC leadership, as well as TAC members have been affected by the disease. People living with HIV are at a much higher risk of developing some types of cancer than the general population

The opposition of the Cancer Alliance to our campaign calls into question the extent to which this group represents the interests of people living with cancer. It is notable that a member of the Alliance, Breastsens, released a statement in support of the work of TAC and SECTION27 to secure access to generic cancer medicines.

It seems that the close relationship between many members of the Cancer Alliance and the pharmaceutical industry is the cause of its opposition to our campaign. For instance, Campaigning for Cancer (C4C), one of the more vocal groups of the Alliance, has many ties to the pharmaceutical industry. The Chairperson, Neil Kirby, works with Werkmans Attorneys, who according to their website, carry out litigation on behalf of multinational corporations to protect their patents and other intellectual property rights.[6] Additionally, a number of board members have previously worked for multinational pharmaceutical companies and one board member is even described as ‘the architect of pharmaceutical and biotech industry efforts to protect intellectual property laws’.[7]  Further, many members of the Cancer Alliance receive part of their funding from pharmaceutical companies.

C4C and the Cancer Alliance undoubtedly do essential and important work in many other areas that improves access to cancer care in South Africa. Yet the Alliance is failing to take a stand on behalf of patients against abusive practices of pharmaceutical companies and the outrageous prices of many medicines. We hope that the Alliance will reconsider its position against South Africa using flexibilities allowed under international law to protect health and join TAC and MSF in our campaign to improve access to medicines for all people living in South Africa.

Unless information is explicitly references then:

-          All public sector prices are calculated from the current government tender

-          Data on patent status was sourced from the Companies and Intellectual Property Commission’s online patent database. However companies are not required to submit applications under the name of the product to which the patent application is subject. Therefore some patents on these medicines may not be included in the table below.

[4] According to the Mediscor Review, anti-hypertensive medicines accounted for the top expenditure by medical scheme on a medicine group in 2011

[5a] In 2000, a common first line antiretroviral regimen containing stavudine(d4T), lamivudine (3TC) and nevirapine (NVP) cost R35,753 (ex VAT) per patient per year in South Africa. These medicines were not provided in the public sector and could only be purchased through the private sector. With the entry of generic medicines there has been a massive drop in the price of these medicines and they are now widely available through the public sector. Today government purchases d4T, 3TC and NVP for R689.28 (ex VAT) per patient per year. With the entry of generic versions of better antiretroviral medicines, most public sector patients now access a regimen containing tenofovir (TDF), 3TC and efavirenz (EFV). The cost to government per patient per year for this regimen is R1,436.88. Reference: The medicines prices were compiled by Beth Vale a former Master’s student with the UCT’s AIDS Society and Research Unit and current DPhil Candidate in Evidence-based Social Intervention at the University of Oxford.

[7] This description is no longer on C4C’s website, but can still be found on the individual’s blog at http://cambattley1.wordpress.com/about/

[8] H Kantarjian et a. Imrpover survival in chronic myeloid leukemia since the introduction of imanitb therapy: a single-institution historical experience. Blood: Journal of the American Society of Haemotology. January 2012 0.1182/blood-2011-08-358135

[10] This figure was accessed through email communication with Novartis on 8 October. Novartis has failed to respond to follow up queries as to whether this is the total number of patients that have received Gleevec since GiPAP began in 2002, or if this is current patients.

[17] G Gao. A systematic review and meta-analysis of immunochemotherapy with rituximab for B-cell non-Hodgkin's lymphoma. Informa Healthcare.  January 2010, Vol. 49, No. 1 ,