The Final Appeal Committee of the Advertising Standards Authority has ordered the Christ Embassy advertisement on e.tv of 22 November 2009 to be withdrawn in its current format. Essentially that means that Christ Embassy will not be able to run adverts on television that make faith-healing claims.

The ruling is important for several reasons. It clarifies questions about religious freedom, what constitutes an advert and, importantly for people who lodge complaints against quack adverts, appendix F of the Advertising Code. 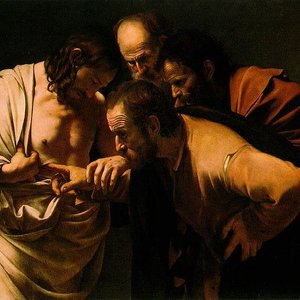 The Incredulity of Saint Thomas by Caravaggio

Churches have the right to recruit people, evangelise and espouse their beliefs. But they may not deceive people into making dangerous health choices.

Christ Embassy's programme showed a 17-year old girl with heart disease making a miraculous recovery as soon as the church's proprietor, Pastor Chris Oyakhilome, lays hands on her. The message conveyed throughout the programme is that Christ Embassy's Healing School is the place to get faith-healed.

The ASA directorate originally dismissed my complaint (on behalf of TAC), saying that it was a programme not an advert. We appealed. On appeal, the Advertising Standards Committee (ASC) ruled that it was an advert and ordered it to be withdrawn. Christ Embassy then appealed and the matter was heard before the ASA's Final Appeal Committee, headed by Judge Mervyn King. Today that committee ordered that the "advertisement in its current format must be withdrawn." The words "current format" are open to interpretation, but the Committee makes it clear that it is quite far-reaching.

This is an important ruling that protects patients. It also answers important questions about the advertising code. The ASC ruling that Christ Embassy appealed found that the advert must be withdrawn because it makes unsubstantiated claims and is also in breach of Appendix F of the Advertising Code. In a nutshell, Appendix F says adverts should not should not make or offer products, treatments or advice for a whole range of medical conditions, including  heart disease, "unless recommendations accord with a full product registration by the Medicines Control Council." Today's ruling by the Final Appeal Committee upheld these findings by the ASC.

The Committee rejected these arguments.

Ordering its withdrawal does not infringe Christ Embassy's religious rights

The Committee explained that Constitutional rights have to be balanced against each other and decisions must sometimes limit one right in connection with another, so long as those limitations are reasonable and justifiable. The Committee went to great pains to explain that they were not infringing Christ Embassy's religious rights:

As explained previously on Quackdown, Appendix F is important because it's a catchall for a complainant when there's a dispute between experts about whether or not an advert's claims are substantiated. Solal Technologies, a serial offender of the Advertising Code, have recently disputed the validity of Appendix F. Consequently the ASA Directorate, which is the first port of call for all ASA complaints, has been unsure about whether it can use Appendix F in its rulings. The ruling in this case  resolves the Appendix F controversy. The dispute is quite technical, but I will try to explain it simply.

Appendix F is, according to the code, owned by the Medicines Control Council (MCC). Christ Embassy's lawyer argued that the contractual provisions of Appendix F "need to be interpreted and applied in accordance with the provisions of the" Medicines Act, which is the act governing the MCC. So for the ASA to make reference to Appendix F in a way that goes beyond the legal mandate of the MCC would be beyond their legal power (ultra vires is the technical term). Since faith-healing is not a registrable product with the MCC, interpreting appendix F to include faith-healing would therefore be ultra vires. Furthermore, under the Medicines Act, the state is supposed to publish regulations on the marketing of medicines and has not done so, therefore the MCC cannot make any pronouncements such as those in Appendix F until those regulations are published.

The Committee said that even if the Christ Embassy lawyer was correct that the provisions of Appendix F were beyond the legal mandate of the MCC, it was irrelevant. The appendix is part of the advertising code and therefore part of the contract that advertisers agree to abide by when they place adverts.

It's important to understand at this point that the ASA is a self-regulating body. The provisions of its code have been agreed to by all the major advertising companies and media houses including e.tv. They have in effect agreed to abide by the provisions of Appendix F; it is not enforced upon them by the state. It therefore does not matter whether the MCC overstepped its mandate when it developed Appendix F.

One aspect of the ASC's ruling was too broad. Its wording could be interpreted to be making an order about future Christ Embassy adverts, which would be beyond what the ASA is legally permitted to do. The Final Appeal Committee's order corrected this problem.

A few weeks ago, Chris Oyakhilome drew a massive crowd to a stadium in Gauteng. He is extremely popular. This ruling is only a tiny dent in his extremely effective marketing.  Churches have the right to recruit people, evangelise and espouse their beliefs. But they may not deceive people into making dangerous health choices.

Thanks to Susannah Cowen, who represented TAC and me, and William Kerfoot of the Legal Resources Centre.

Great work, and an excellent result. The clarifications on what is and isn't an advert, and on Apppendix F, will have long term benefits for all.

Great work. I wish that this worked like newspaper corrections, were etv would have been forced to put in a 5 min piece on how it aired unsubstantiated, and possibly dangerous content.

This ruling sets a precedent which can be applied to other “belief systems” about health and illness and their treatments - so-called alternative "paradigms" where advertisers promote health choices with potentially dangerous consequences.

Appendix F, though very useful, actually needs updating to include several illnesses/conditions which are not listed but should be. For example, it is notably silent on a number of mental health / mental illness problems. Also - apart from specifying “AIDS” it does not mention “immune disorders” as a broad category. Various “immune boosters”, “immune stimulants” and “immune modulators” are advertised to people with HIV (and other conditions which may not even have an immune system basis).

Appendix F should also extend the definitions of some common but serious disorders e.g. "diabetes" - where advertisers use phrases such as “helps [to] balance the blood sugar levels” to avoid “naming” the condition and being in contravention of the appendix.

I strongly and tenaciously disagree with ASA.

Chris Oyakhilome's program is not an advert. It is a program like all other programs on TV. If chris is showing a program e.g. night of bliss he's hosted let say in a country like CANADA, nd ppl got healed on various health problems, doesn't he has a right to show it on his program on e.tv?

in addition there's a vast difference between Medical way of doing tings & FAITH way of curing disease. THE FACT THAT MEDICAL PRACTIONERS SAYS SMETING CAN'T BE CURED doesn't mean by faith it can't be cured. I REMEMBER that last yr I PERSONALY went to pray for some1 who had gangerine cancer nd was already scheduled for legs amputation operation as there was no medical cure 2 her condition yet after praying with her for three consecutive times, doctors cancelled the operation they said her legs are recovering.

SA LEADERS SHOULD LEARN NOT TO IMPOSE THEIR LIMITATIONS ON PEOPLE OF FAITH. I 'M REALLY DISAPPOINTED.

I ALSO FEEL THAT THEY ARE DEPRIVING PEOPLE OF SA THEIR RIGHT TO HEALING. HEALING SCHOOL HELPED THE FRIEND OF MY COLLEGUE WHO COULDN'T WALK AFTER SHE WAS TOLD SHE HAS THE TB OF BONES THAT LEFT HER PARALIZED AND SHE HAD TO SEAT ON A WHEEL CHAIR. HOWEVER, AFTER ATTENDING HEALING SCHOOL SHE GOT HEALED AND TILL TODAY HER HEALING IS PERMANENT. SHE IS WORKING AND WALKING.

MY OWN COLLEGUE HAD A PROBLEM WITH HER SIGHT SO SHE HAD TO DEPEND ON SPECTACLES (DOUBLE LENCE) TO BE ABLE TO SEE CLEAR. THE WORSE PART IS THAT SHE COULDN'T DRIVE AT NIGHT. WHEN SHE WENT TO HEALING SCHOOL ACCOMPANYING HER PARALYZED FRIEND WHO SUFFERED FROM THE TB OF BONES, SHE WAS ALSO HEALED. NOW SHE'S NOLONGER WEARING SPECTACLES AND SHE CAN DRIVE AT NIGHT.

When people are full of unbelief, they will never complain when

ADVERTS LIKE DAVINCI CODE are aired. bt when programs that brought solution to my collegue are aired they call them fake and unreal. this is really unfair coz CHRIS forces no one to come to healing school. people hav a choice to choose what to believe.

We are not likely to reach agreement on whether or not Pastor Chris and the Healing School has the ability to administer miracles. I am aware of people who stopped taking their prescribed medicines when they went to Christ Embassy.

The one I refer to often is the case of the woman with XDR TB who was getting better on her medicines, joined Christ Embassy, apparently believed she was cured and then stopped taking her medicines. She then passed on XDR TB to her children and died.

But I do want to try to convince you of this: (1) The Christ Embassy programme is also an advert and (2) the advertising code protects consumers from claims that cannot be backed up with evidence. This is so that sellers of products cannot claim whatever they like and deceive consumers. It's not merely a protection against Christ Embassy; it's protection against all product sellers.

Once it's an advert, Christ Embassy has to stick to the code that advertisers have agreed to. They have to be able to substantiate their claims and they may not make any claims about certain diseases. Christ Embassy had the opportunity to show evidence of their faith-healing claims. They were unable to do so. They also claimed to cure heart disease; the code says if you advertise you cannot do that.

Nothing in the ASA ruling stops you or anyone from going to Christ Embassy's Healing School or church services. Nor does it stop Christ Embassy from advertising itself.

That may be so, but what about frauds? If there is not standard testing procedure, unbiased and double blind, how can you tell the difference? This is about protecting the public from those who might exploit them.

If you want to make a claim, you should be required to prove it first. If you cannot show that is both effective and safe, you shouldn't be able to market it.

Also there is no need to shout.

nathan I just read your article in the Times today concerning TB and faith healing claims. I just blogged at indradelanerolle.blogspot.com on my experience in the last few weeks in trying to get an online ad removed for revivotea which, co-incidentally, ran on the Times website. The Times and Google responded pretty quickly and took the ad off. My complaint to the ASA is still pending. Indra

Thanks Indra. I recommend people read your article.

which is more probable, that nature should leave its cause or that man should lie ? I do not remember hearing that nature has deviated from its cause but at the same time more than a million people have told a lie. So its not probable that a miracle should happen than that a man should say a miracle has occurred.