Dudley Lee's case reveals how overcrowding and a struggling court system are fuelling a TB epidemic. 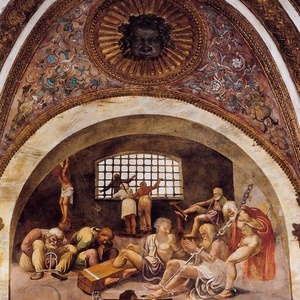 "Everyone is locked up in a cell doing nothing. Why don't they teach people trades so they have prospects when they come out of prison?"

A South African Medical Journal (SAMJ) study explains that South Africa has the fourth highest global incarceration rate, with more than 165,000 prisoners in 237 prisons. There is rapid turnover of awaiting-trial prisoners, with 79% imprisoned for less than 12 months and the number of people passing through the system annually exceeding 368,000. There are at any time about 3,200 prisoners awaiting trial in Pollsmoor, the 3rd-largest facility with awaiting trial prisoners in the country. These prisoners are mostly kept in communal cells of 40 to 60 people each.1

Everyone who is detained, including every sentenced prisoner, has the right ... to conditions of detention that are consistent with human dignity, including at least exercise and the provision, at state expense, of adequate accommodation, nutrition, reading material and medical treatment.2

A 2011 court judgment showed how far the country is from attaining this right. From November 1999 to 27 September 2004 Dudley Lee was an awaiting trial prisoner in Pollsmoor prison complex in Cape Town, except for a four month period in 2000 during which he was out on bail. In June 2003, while he was in prison, he became ill and was diagnosed with pulmonary TB. He later sued the Minister of Correctional Services because, he argued, the state’s conduct caused him to become ill with TB.3 4

In his court action, Lee’s legal team claimed that:

The court judgment describes overcrowded cells in which inmates typically spend 23 hours per day. They spend an hour in an overcrowded recreational area. The environment is engulfed in tobacco smoke and fumes and coughing. There is a chronic shortage of nurses and staff and so the TB management system that is supposed to be used is implemented inconsistently at best.

TB data in the prison is poorly kept and inconsistent. For example, one doctor testified that treatment cases had to be recorded in a treatment register which was held in quadruplicate. One copy was to be sent off to the Medical Officer but documents which were supposed to have been forwarded to the Medical Officer were still in the register. A schedule of TB cases covering the period 1998 to 2009 had been prepared by the prison. But other records in the prison showed the schedule was wrong. The total number of TB cases for 2001, according to the register, was 177 but the schedule recorded 69 cases with no cases from April to October.

South Africa has an extraordinarily high crime rate and there is not much public sympathy for prisoners. The authors of the SAMJ article quote Fyodor Dostoevsky that a "society should be judged not by how it treats its outstanding citizens but by how it treats its criminals." With South Africa's high crime rate, this is not a widely held view, in spite of Constitutional guarantees and legislation protecting prisoner rights. So it is worth noting that Lee was acquitted and arguments lacking empathy for criminals are irrelevant to his case. Moreover, as the SAMJ article explains, high TB transmission rates in prisons likely contribute to a high TB burden in the general population.

The judgment describes a justice system that is under-resourced, cruel and careless. Here the judge explains the effect of prison conditions on Lee’s testimony:

It is difficult for state employees or former state employees to testify against the state. The government has a record of ostracizing health workers who stand up for patient rights. During the Tshabalala-Msimang era, several doctors who stood up against the state and provided antiretroviral treatment were disciplined, sometimes even dismissed.5 This case was no exception. Lee depended on testimony by doctors Paul Theron and Steven Craven, who had been employed as part-time district surgeons at the prison, as well as a male nurse, Frans Muller, formerly employed at the prison. The judge described found their testimony, describing the problems at the facility, reliable. All three described their frustrated attempts to get the authorities to improve prison conditions. Theron and Muller have both faced disciplinary action during the last few years. Theron's case was unequivocally due to his whistle-blowing activities. The details around Muller's case are less clear; he was dismissed for alleged corruption. Theron, however, reached a settlement with the state and was redeployed to a public hospital.6 7

The judge was less impressed with Professor Paul van Helden who testified for the state. Van Helden is described on the website of Stellenbosch University’s Division of Molecular Biology and Human Genetics as the 4th highest ranked scientist in the world in the field of tuberculosis. He claimed that Lee’s acquisition of TB was primarily a consequence of genetics and re-activation, not the prison environment. This testimony was rebutted by Dr Theron. The judge pointed out a salient problem with Van Helden’s testimony:

Prof Van Helden also appeared to fall into the trap of losing his objectivity. So, for example, he used statistical evidence which was obtained in lower socio-economic areas such as Ravensmead and Masiphumelele to justify his opinion that the plaintiff, who came from a middle class environment, had probably been infected with TB prior to coming into the prison, in circumstances where he himself had admitted that those statistics would not be applicable in middle and higher socio-economic areas. Indeed, Prof Van Helden went so far as to say that the plaintiff's chances of having been infected with TB prior to entering prison were "exceptionally high."

There is no doubt that Prof Van Helden is an expert in his field, but he is not a medical doctor and has had no experience in the diagnosis and treatment of TB. His experience relates to research. On the whole, Prof Van Helden's evidence was tainted with bias and misinformation. As a consequence, his evidence is, in my view, in many instances unreliable and inaccurate.

On the totality of the evidence, I am accordingly satisfied that it is more probable than not that the plaintiff contracted TB as a result of his incarceration in the maximum security prison at Pollsmoor.

She also found "that a reasonable person in the position of the defendant would have foreseen that the prevailing conditions in the maximum security prison at Pollsmoor would reasonably possibly spread TB amongst inmates and cause inmates, such as the plaintiff, who had not previously been ill with TB, to succumb to the disease."

And she found that "a reasonable person in the defendant's position would, in my view, have taken steps to guard against the spread of TB in the maximum security prison, because it is such a formidable disease which is easily spread. More particularly, a reasonable person would have ensured that sufficient numbers of nursing staff were employed to perform the various tasks involved in the control and prevention of TB in the said prison."

The judge found the state’s actions unlawful. She found the Minister liable to the plaintiff for having become ill with TB and ordered the state to pay costs. Unfortunately the Minister chose to appeal and the case was heard before the Supreme Court of Appeal in Bloemfontein last week. Judgment is pending.

Lee, who is 66 years old, is asking for R345,000 compensation for contracting active TB in prison. "My health has deteriorated because of my stay in Pollsmoor. I now have prostate cancer as well. The government has been dragging this out since 2003," he explains. He has strong views on how prisons should be run, "Everyone is locked up in a cell doing nothing. Why don't [the prison authorities] teach people trades so they have prospects when they come out of prison?"

The fascinating SAMJ article based on the court case

Simon Johnstone-Robertson and his colleagues at Cape Town and Stellenbosch Universities have published an important study that uses the data made available in the court case. They modelled the probability of TB being transmitted to an awaiting trial prisoner at Pollsmoor. They calculated the risk of transmission to be 90% in one year. This is the risk of TB infection, not the risk of becoming ill with TB which is considerably lower. Also, as the authors explain, 79% of awaiting trial prisoners are incarcerated for less than a year.1

This was a modelling exercise that used some uncertain data and necessarily simplified reality. The authors' calculations are approximate, not precise, estimates. Nevertheless, they have presented compelling evidence that prisons are an incubator for the spread of TB.

The horrendous conditions are probably not confined to just one prison. We only have detailed information on the situation in Pollsmoor because of this court case.

Johnstone-Robertson and his colleagues explain that there are many strategies for dealing with the high transmission rate. They suggest that ventilator grills should not be closed at night. Communal cells can be cross-ventilated by using barred rather than solid doors and using corridor ventilator extraction systems. Carbon dioxide monitoring should be implemented. There should be active case finding. New fast TB diagnosis methods (e.g. the Gene Xpert), should be introduced. They also say that TB notification data for South African prisons should not be considered secret or restricted information and that accurate data should be made available to the Judicial Inspectorate of Prisons to include in the annual report on the state of our prisons.

The problem, acknowledged by the authors, is that sensible recommendations for improving the situation have been made repeatedly by the Judicial Inspectorate. These can be found in its annual reports.8 Also, Dr Theron, Dr Craven and Mr Muller testified about the efforts they made to get the authorities to act. In 2000 the Department of Health set up a special task team to deal with TB. But its recommendations were either followed only temporarily, half-heartedly or not at all. A 2001 Parliamentary Portfolio committee heard evidence from Dr Craven on conditions in Pollsmoor, but no substantial change followed.9 The SAMJ ran an excellent feature article in 2001 examining Pollsmoor, including Craven's illuminating notes on the malfunctioning system.10

A further problem apparent from this case and several cases that the Treatment Action Campaign has been involved in is the sheer inefficiency of the court system. This creates a bottleneck that results in large numbers of awaiting trial prisoners. Consider the large number of trial hearings Lee attended and that, despite being acquitted, he spent an amount of time in prison appropriate only for very serious crimes.

There is clearly a lack of political will to address TB in South African prisons. The steps to address TB have been identified but are not being implemented. Perhaps more cases of infected prisoners or former prisoners suing the state, such as this one, and protests are the only way to address this ongoing public health crisis.

The annual risk of TB transmission in the Western Cape in poor communities is also extremely high. As one of the authors told me, reaching adulthood in the province carries a risk of becoming infected with TB comparable to the risk of an awaiting trial prisoner in Pollsmoor becoming infected.

This is an extended version of an article first published in HIV Treatment Bulletin South. Thank you for helpful communication from Dr Alex Welte, one of the co-authors of the SAMJ article, Dudley Lee and Jonathan Cohen, who is Lee's lawyer.