Today, on World AIDS Day the Treatment Action Campaign (TAC) will picket at the Durban offices of HIVEX Limited and demand that they stop offering HIVEX as a treatment for HIV. This follows a remarkable letter that HIVEX sent to TAC and an investigation by the television programme Special Assignment. 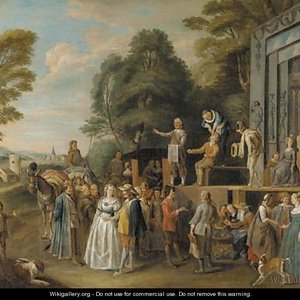 The Charlatans an outdoor theater with a quack doctor and an audience of gentry, monks and townsfolk. By Pieter Angellis. Source: Wikigallery.

Nathan Geffen has previously written on Quackdown about the links between HIVEX and the arms deal.

Whereas these links are intriguing, the much more urgent concern is how HIVEX is misleading HIV-positive people.

To recap, HIVEX, under the leadership of Clive Harvey Fox, claims to use electromagnetism to treat HIV. Their website states, “HIVEX Treatment targets proteins in the HIV virus. It is intended to disable the virus so that the virus stops causing the death of other cells  ('apoptosis'), allowing white blood cells (lymphocytes) to increase.”

No credible regulatory body has confirmed that HIVEX is an effective treatment for HIV. In fact, no studies on the efficacy of HIVEX for the treatment of HIV in human beings has even been published. In addition, the proposed mechanism of HIVEX treatment is scientifically implausible.

Patients are charged R1,000 for the electromagnetic HIVEX treatment. After that they are encouraged to use a "detox" mixture that costs R200 per month.

TAC Kwazulu-Natal notified HIVEX of their intention to picket outside the HIVEX offices on World AIDS Day (1 December 2011). Fox responded by saying that HIVEX is not a cure for HIV and that it was wrong of TAC to suggest that he had presented it as such. Whether or not HIVEX has been explicitly represented as a cure, it is certainly being presented as an effective treatment for HIV.

Fox’s letter also stated, "The equipment is designed to disable certain proteins which form part of the HIV virus. In a Phase II clinical trial conducted at the University of KZN it was shown, statistically significantly, to lower rates of apoptosis and to increase viable lymphocytes in people infected with HIV. It was not shown to affect viral load, or CD4 count statistically significantly. We do not know what results would be obtained in relation to viral load or CD4 count in a trial powered for efficacy, Post-hoc analysis of the trial results showed that adequately dosed patients were 5.6 times less likely to require hospital, to die, or need ARV's.”

Conveniently for HIVEX, this trial has not been published, so it is impossible to check these claims. We find it alarming that any ethics committee in South Africa would have given approval for a Phase II study, especially since there is no published Phase I data. We do however understand from other sources that the study was primarily aimed at assessing safety and that there was no proof of efficacy.

For HIVEX Limited to offer HIVEX treatment as a treatment for HIV before any peer-reviewed trial results proving efficacy have been published and before the World Health Organisation or any regulatory authority has approved the device for this purpose, is unethical and irresponsible. That we have heard reports of people stopping ARVs after HIVEX treatment is even more disturbing.

In the memo that TAC Kwazulu-Natal will be handing over to HIVEX today, TAC demands that HIVEX stops promoting HIVEX as a treatment for HIV or any other serious diseases and publishes the findings of the study conducted on the treatment.

The investigative journalism programme Special Assignment will broadcast a special World AIDS Day episode in which various quacks, including HIVEX, are featured. It is scheduled to be shown on Thursday 1 December 2011 at 20:00 on SABC3.

Earlier this year I lodged a complaint on behalf of TAC with the Advertising Standards Authority against claims that HIVEX is an effective treatment for HIV made on the HIVEX website. At the time the ASA ruled, the HIVEX site was temporarily behind a password, and the ASA did not rule on the merits of the matter, accepting HIVEX’s undertaking that they had "suspended the site for review to ensure compliance and to avoid any misunderstanding." However, the HIVEX website is back up and making similar claims as before. A breach complaint has been lodged with the ASA. That ruling is pending.