Mary-Jane Matsolo of the Treatment Action Campaign tells the story of a fatal arson attack on a woman suspected of being a witch. We publish this story because it shows both how mystical beliefs can have awful consequences, but also how these beliefs do not go unchallenged in South Africa's townships.

Racists should find no solace in this story: tens of thousands of people, mostly women, were executed --by the state and not private citizens as in this case-- for being witches in Europe from the 15th to 17th centuries.

Ultimately, this is a story of how a community successfully sought justice in response to a terrible deed fuelled by superstition. 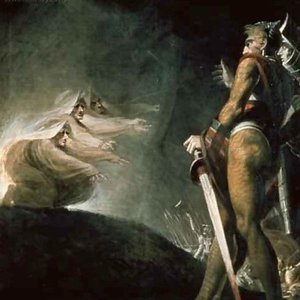 Macbeth and the Witches by Johann Henry Fuseli. Source.

James claims to have seen Nonjengezinye Matwa’s face in the sangoma’s mirror and asserted that Matwa had killed his mother through witchcraft.

Nonjengezinye Matwa lost her daughter and grandson as a result of a petrol bombing to her RDP home on 2 March 2009. The attack was carried out by Kwanele James and Mzuvukile Thoswa after James visited a “sangoma,’ a practitioner of herbal medicine, about his mother’s death. James claims to have seen Nonjengezinye Matwa’s face in the sangoma’s mirror and asserted that Matwa had killed his mother through witchcraft.

The two men had locked the Matwas’ home and threw petrol bombs through the windows. Nonjengezinye Matwa and sisters Thembakazi, Anelisa, and Yelezwa Phulwana were all inside the home during the bomb. Yalezwa Phulwanna’s two-year-old son was also in the home. Nonjengezinye and two of the sisters, though injured, managed to escape their burning home when neighbours kicked the door down. Phulwana died from her injuries in a hospital a week later. Her two-year-old son died in the fire.

Nonjengezinye had worked for much of her life to provide for her family. Her daughter’s death is devastating. “I worked hard selling sheep heads and trotters for a living to bring my children up and before she could achieve anything, she was gone.” Phulwana was the family’s main income provider, working as a cashier at a supermarket.

The two accused men were scheduled to appear in the High Court of Cape Town on 11 October 2010. They faced nine charges, including arson, murder, three counts of attempted murder, and encroaching sections of the Witchcraft Suppression Act 3 of 1957. The case was heard more than 22 times in at the Cape Town High court. Judgment was handed down on 2 December 2010 where accused 1, James, and accused 2, Thoswa, were both found guilty of murder, attempted murder and arson.

When Mrs Matwa came to the Treatment Action Campaign (TAC) she was traumatized and distraught. She didn’t know how she was going to handle the case on her own. Our Kuyasa branch supported her throughout her ordeal. The case dragged on for over two years. It went from the Khayelitsha Magistrates' Court to the Cape High Court. TAC was there with her throughsout. We provided taxis and protested outside court, and every time the accused appeared we were there inside the court branded in our HIV positive t-shirts, to show the judge that the community was sick and tired of such incidents in our areas.

TAC released press statements, publicized the case on local radio stations, mobilized other organisations to support us and got the media to be interested in this story. Once the story received media attention that is when things started to get moving. It was covered by Vukani and the Cape Times. The case was finally wrapped up and Mrs Matwa got her justice.

We are a bit perplexed by the Witchcraft Suppression Act 3 of 1957. What does it say? Is it constitutional? We will gladly publish a well-researched, sobre 800-1200 word article on this. So if you are well versed on this piece of legislation, please consider submitting an article via our Contact page.