The US President's Emergency Plan for AIDS Relief (PEPFAR) should end its anti-prositution pledge. It harms sex workers and it's bad for health, especially HIV prevention and treatment. 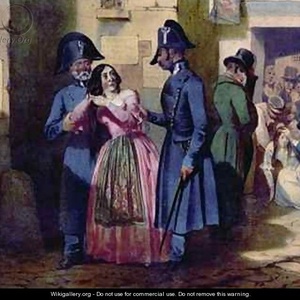 Arrest of a Prostitute by the Police by Jules David. Source Wikigallery.

Sex work is illegal in South Africa. This makes it very hard to provide health care services to sex workers, but a detailed discussion of this unacceptable situation will have to be the subject of another article on Quackdown. This article instead deals with the harm caused to sex workers health by the biggest AIDS funding institution in the world, PEPFAR.

PEPFAR is an initiative to diminish the impact of the global AIDS epidemic. From 2004 to 2012, it invested R29.7 billion (US$3.7 billion) into HIV prevention, treatment and care in South Africa. At the end of 2011, PEPFAR had assisted 1.1 million people with HIV to receive life-saving antiretroviral treatment. It also helped more than 200 000 pregnant women get prevention of mother-to-child transmission services. PEPFAR support of South African AIDS programmes has been far-reaching and immensely beneficial.

Yet, there's a big problem with PEPFAR funding. PEPFAR recipients have to commit to a perplexing promise: to oppose sex work. According to the USA’s “Leadership Act”, all recipients of PEPFAR money have to sign an agreement with PEPFAR that commits them to the following:1

No funds . . . May be used to provide assistance to any group or organization that does not have a policy explicitly opposing prostitution and sex trafficking.

No funds . . . may be used to promote or advocate the legalization or practice of prostitution or sex trafficking

There are two problems with this "pledge".

Sex work relates to adult, consensual sex. It is a job, a way for people to make a living. Trafficking is similar to sexual slavery and is a gross human rights violation. The United Nations is clear that for a person to have been the victim of trafficing these conditions must be met:

(a) The person must have been moved.

(b) There must have been deception or coercion for the purposes of exploitation.

Trafficking and sex work are not the same thing, and conflating them is disrespectful to sex workers and minimizes the severity of the crime of victims of human trafficking.

(2) Direct and ‘chilling’ effects on organisations working with sex workers

Some PEPFAR recipients have documented how the pledge has limited the access of sex workers to health care and increased their vulnerability. The Global Network of Sex Work Projects’ criticises the pledge saying that no clear guidance has been given on what is prohibited and allowed under the pledge, that some organisations have limited their services to sex workers, have withdrawn their partnership with sex worker organisations have suppressed information of their work with sex workers and have used vague terms like “women at risk” or “vulnerable populations” to disguise the fact that they work with sex workers. This is bad not only for sex workers but for evidence-based medicine because as the Global Network of Sex Projects explains it is particularly difficult to evaluate what programmes are effective on sex work issues, and how HIV affects this population.

A case study: The Wits Reproductive Health and HIV Institute

A South African example of the implications of the PEPFAR Pledge is the Wits Reproductive Health and HIV Institute (WRHI) based in Johannesburg. This organisation has been providing health services specifically aimed at woman sex workers in Hillbrow since 1996. It started receiving PEPFAR funds in 2003, and was able to expand its services to sex workers. Up until recently, it has been the only sex work-specific health care service available in South Africa.

The institution has accumulated a wealth of information on sex worker health problems. The staff have vital first-hand knowledge of the detrimental impact of the criminal law on sex workers. The voices of WRHI staff would carry particular authority on the public health implications of the criminalisation of sex work, and the urgent need to decriminalise sex work in South Africa. But their voices are effectively silenced by the PEPFAR Pledge. Indeed, in 2002, one of the Institution’s doctors provided expert testimony in a Constitutional Court case in which the criminal law on sex work was challenged (St vs. Jordan 2002 (6) SA 642 (CC)). Under PEPFAR obligations, this would no longer be possible. In the context of current debates on law reform of sex work –and those looming in future – WRHI will not be able to present input or take a particular view on the matter.

PEPFAR has direct funding agreements with 120 organisations in South Africa and there may be others who are in a similar position as the WRHI. The medical anthropologist Paul Farmer and his colleagues have argued that health care workers are the “natural attorneys of the poor”. PEPFAR funding agreements effectively stops these “attorneys” from speaking out about the cruelty and human rights abuses of the current criminal system.

Various courts in the United States have ruled that the PEPFAR Pledge violates the right to free speech of organisations bound by it. Regrettably the judgements only apply within the United States. This creates the astonishing paradox that countries outside of the USA are bound by the Pledge, but not those working within the USA.

The PEPFAR Pledge was drafted under the leadership of George W Bush and the laws that authorise PEPFAR funding included a number of other provisions based on right-wing, religious approaches to HIV/AIDS. Since the election of Barak Obama as President of the USA, most of these ideology-based provisions have been changed to reflect current evidence on HIV/AIDS. The PEPFAR Anti-Prostitution Pledge has not.

Scores of organisations and individuals in South Africa, Africa and Asia are bound by the PEPFAR Pledge and may not be able to risk speaking out against its requirements. This places a greater responsibility on those of us who can speak out, to demand the repeal of the PEPFAR anti-Prostitution Pledge and to move to evidence-based policy on sex work and HIV.