In Mary-Jane Matsolo's article on the Khayelitsha Witch Burning case, we asked for readers to provide information on the 1957 Witchcraft Act. Here is feedback from two readers who have investigated the history of this act. 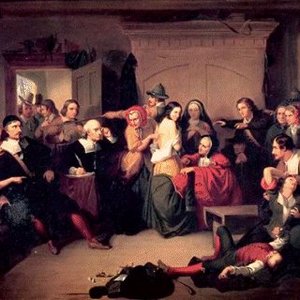 Examination of a witch in Salem by Thompkins H. Matteson, 1853. Source.

Despite its stated aim, it arguably does not acknowledge the existence of, or criminalize, actual witchcraft, only the so-called pretence of witchcraft (and also accusations of witchcraft). It does not appear to be effective at preventing the violent witch hunts that persist primarily in our rural areas ...

The Witchcraft Suppression Act 3 of 1957 also denies the constitutional rights of among others self-defined Witches and traditional healers and should therefore be revoked on constitutional grounds. Note that the following criminal offence listed in the Act is not necessarily directed at harmful practices (or pretence thereof), and a person convicted of such an offence may be liable to imprisonment for up to two years: "for gain pretends to exercise or use any supernatural power, witchcraft, sorcery, enchantment or conjuration, or undertakes to tell fortunes, or pretends from his skill in or knowledge of any occult science to discover where and in what manner anything supposed to have been stolen or lost may be found".

Damon Leff, director of the South African Pagan Rights Alliance (SAPRA), wrote to Quackdown explaining that SAPRA appealed for a review of the Act in February 2007. Damon provided the text of SAPRA press statements. Below is an edited extract from these.

The South African Law Reform Commission (SALRC) has agreed to conduct a preliminary investigation in order to determine whether or not the Witchcraft Suppression Act 3 of 1957 should be repealed.

... The South African Pagan Rights Alliance has requested the Commission to investigate whether the proposed Mpumalanga Witchcraft Suppression Bill (2007) and the existing Witchcraft Suppression Act 3 of 1957 undermine the constitutionally guaranteed freedoms and rights of existing religious minorities in South Africa by deliberately criminalising and prohibiting rights of the religious minorities’ to exist and to practice their religion.

The SALRC is responding to a request made by the South African Pagan Rights Alliance in February 2007 to have Act 3 repealed on the grounds that it contradicts several sections of Chapter 2 of the Constitution of the Republic of South Africa (Act 108 of 1996). SAPRA has argued that Act 3 must be declared unconstitutional and invalid to the extent to which this legislation identifies one group of persons (Witches), on the grounds of belief (Witchcraft), to be prohibited and criminal.

The Witchcraft Suppression Act was created with the intention of suppressing indigenous African practices, practices incorrectly identified as ‘witchcraft’. Traditional Healers have publicly stated that they have never and do not identify their traditional African practices and religions as ‘witchcraft’ and they regard the existence of Act 3 as prejudicial to their constitutionally guaranteed right to belief and religion.

The continuing existence of Act 3 criminalises identified practices, some of which are associated with and practised by both Traditional Healers and self-defined Pagan Witches. The Act criminalises South African citizens who do self-identify as Witches and who do practice Witchcraft, by prohibiting anyone from professing to be a Witch or to practicing Witchcraft.

While sceptical of all religious beliefs that posit the existence of things without evidence, Quackdown agrees with the SAPRA position that "the existing Witchcraft Suppression Act 3 of 1957 undermine[s] the constitutionally guaranteed freedoms and rights of existing religious minorities in South Africa by deliberately criminalising and prohibiting rights of ... religious minorities." Everyone should be free to believe what they choose and to practice --or not practice-- religion, so long as such practices do not infringe the rights of others.